This past weekend I finally went for my open water dive certification. After trying on our honeymoon, doing a "discover" dive over April break, and paying far too much money for all this, I finally did all the dives and dreaded skills tests and am now officially certified up to 60ft! The skills tests weren't too bad overall, except for the mask skills. Flooding and taking off your mask is no fun when you wear contact and have sensitive sinuses, but I survived it and can now do the fun stuff. Our goal is to get back to Saba where some of the top dive sites in the world are. I also was able to convince our friend CamTu to do the course with me, which did make it easier and more fun. There was also another spouse doing the course with us. It was a long weekend of skills on Saturday and 4 dives on Sunday (a bit much for 1 day). We did see a lot of really cool stuff though which helped make it more fun. We saw 2 spotted eagle rays, several sting rays, a baraccuda, puffer fish, a moray eel, several green turtles and hawksbill turtles, and of course a huge variety of fish. I definitely look forward to doing more diving. Owen is going for his advanced open water certification this weekend, which allows him to go to 100ft and gain more skills, I don't think I'll be doing that one ;)
Anyway here are many pictures from the dive, all but the first 2 were taken by Michelle de Villiers of Octopus Diving (thanks Michelle!), enjoy!! 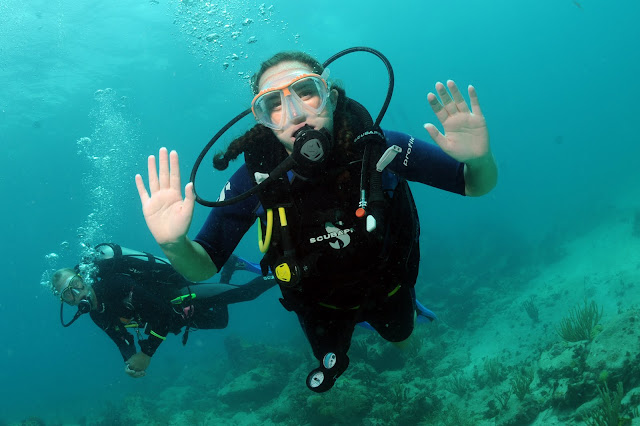 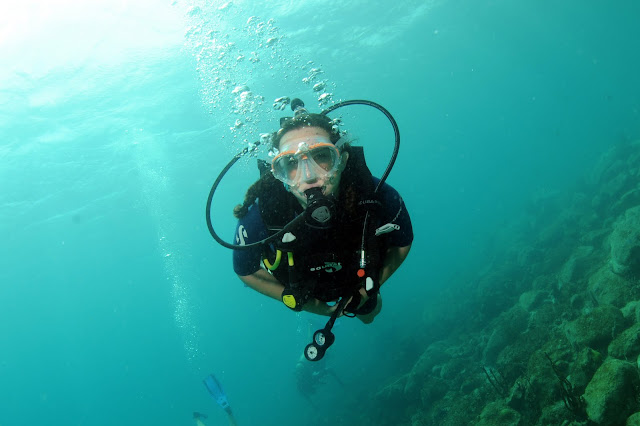 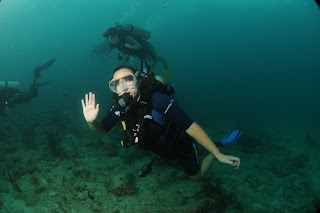 Just a fun little update about our blog. We knew family and friends were reading it, but we had no idea just how many views we actually get or that it's being read beyond just the states and here. Here's some fun stats:

On Sunday, Owen and I participated in the annual Boardwalk Triathlon in Philipsburg. This is the largest event of the year, with over 100 competitors, including several from other islands. We got a group of 4 other students to race with us, most were first time triathletes. There was a delicious pasta dinner the night before at the restaurant on the boardwalk that was hosting the event. The next morning we arrived at the transition area to begin setting up around 6:30am. We were fortunate enough to have another racer bring our rental bikes in his truck for us, since 5 bikes in 2 cars wasn't going to happen. There is quite the community among the racers on island, you begin to see the same people at every race and they are very friendly and helpful. I think it has been a great way for us to get connected on the island beyond the medical school, and I know it has been a great community for me to explore racing in.

Back to the details of the race. At 7am the Olympic triathlon started. Owen was the only one who did this distance. It was a 1500 M Swim, 40 K Bike, 10 K Run. His bike was mostly crazy hills, but he still did a great job. He placed 3rd for his age group in the Olympic.  The rest of us did the Sprint distances of 750 M Swim, 20 K Bike, 5 K Run. The three of us girls all placed for our age group in the Sprint, I took 3rd. After the race we had brunch provided by the same restaurant and then the awards ceremony. We each took home a hand crafted and painted mug, I'll post pictures of that once I pick it up from TriSports (the sports store).

Overall it was a great time. My goals in order were to finish/cross the line still standing and to come in at 2 hours. I accomplished the first and almost the second with a final time of 2 hours 6 minutes (I actually looked at the wrong clock on my last lap of the run and thought I was already over 2 hours so I didn't push it, oh well). Owen finished with a final time of 3 hours 28 minutes. I will post more pictures if we can get them, from the race and podium, and the mugs, here are just a couple for now.

We had our second visitor two weeks ago! My very dear friend Sarah Bouckoms stopped in St Maarten on a cruise with her family. I picked up her and her mom in the morning and brought them to our side of the island. We spent a little bit of time at the Sunset Beach Bar watching the planes come in (and drinking pina coladas at 10am!). After that, I brought them back to our apartment to meet up with Owen for a little bit and show them around where we live and the school. It was nice to share that with someone from back home.

After spending the morning in the Cupecoy area seeing "real" island life, we headed back to Philipsburg for the touristy stuff. We had lunch at one of my favorite restaurants, The Greenhouse. Then we did a little shopping on Front Street. All too quickly the day was over and we headed back to the ship dock. Sarah ran back on the boat to get me a Starbucks before they left! It was sooooo good! Overall it was a GREAT day! It was so so so nice to spend time with Sarah and her mom. I love the type of friendship that you can live on the other side of the world from the person for more than a year and pick right back up where you left off. Thank you Sarah for planning your cruise to stop here, can't wait to see you in CT in July. Next time we'll come to New Zealand!