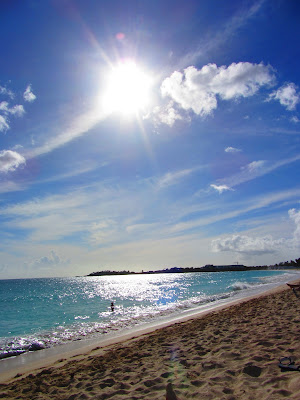 - A brief island history: The island is a mere 36sq miles with the north side of the island being French and the south side being Dutch. Sometime during the late 1700's while the two sides were "at war", 16 (you heard it, 16) Dutch radicals had had enough and stormed the French fort. Of course the Frenchies surrendered without a shot being fired. A whole bunch of stuff after that and now everybody is friends...except for the French (they still don't like anybody). France currently controls the French side and the Dutch side has recently become an offical territory of Holland. Populations are something like 41,000 Dutch and 36,000 Frenchies. That's about it.

- Both the air and water temperatures range from 75-85 all year round.

- The order of towns in close proximity from west to east: Porto Cupecoy, Cupecoy (where we live), Maho, Princess Juliana Airport (not a town), Simpson Bay, and Pelican Key. Everywhere else, no matter how close it looks on the map, takes forever to drive to/from. Hotels in the towns listed start around $90/night.

- The currency on the Dutch side is the Netherlands Antilles Guilder and on the French side it is the Euro. However, the American Dollar is accepted throughout the island. American credit cards are charged a foreign usage fee. Nothing is cheaper on the island than in the States except alcohol.

- To our surprise any beach can be a nude beach.

- There are two airports on the island. The one you want to use (if you plan on visiting) is Princess Juliana International Airport (SXM). The airport is on the Dutch side of the island and only a 15 min jog from AUC.

- St. Maarten is in the EST time zone. However, the island does not participate in that daylight savings stuff. When you set your clocks back in the fall, they do not.

Well it's that time of year again! We are officially in Hurricane Season 2012! Check here for updates as the season gets busy (scroll down for most recent posts).


Predictions released by the Colorado State University’s  call for a slightly below-average probability of Caribbean major hurricane landfall in the 2012 Atlantic Hurricane Season.

He has estimated that this hurricane season will have about 5 hurricanes, 13 named storms, and 2 major hurricanes developing to at least Category 3 strength, or higher. 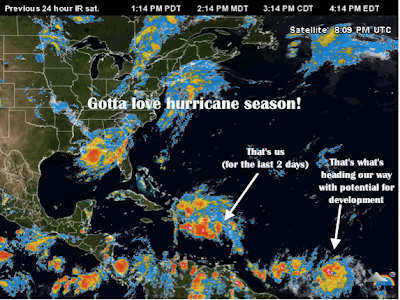 Well we haven't had any hurricanes so far this season, but it's definitely rainy season! We've had torrential rains the last 2 days as you can see on the radar above. Looks like we might get a day or two break, let's hope. Then we're all watching this developing storm that came off the African coast. There's potential for development over the next couple days before it reaches us. Could it be Ernesto?? Stay tuned to see what develops!

3 August 2012
The outer bands of Tropical Storm Ernesto (the storm on the right in the picture above) have just reached St Maarten. While the storm has stayed safely to our south, we are experiencing some strong wind gusts and rain. Should be a wet evening as Ernesto passes through. Next up, off the African coast another storm with high potential for development. It's definitely reaching the height of hurricane season now as you can see the storms start lining up! 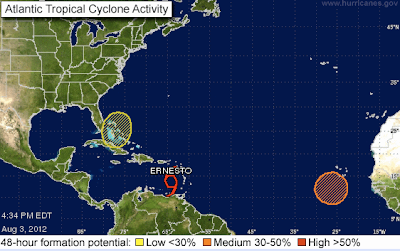 4 August 2012
That storm with high potential for development seen in orange above, is now Tropical Storm Florence. Time to start watching it's track! 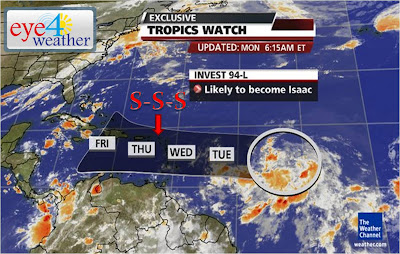 We are leaving the island this Thursday but it seems the hurricanes don't want to let us leave without one more potential storm. There's a storm that is likely to become Issac in the next day heading for us for Wed/Thurs, perfect timing! We'll keep you posted on what happens with the storm and if we get to leave Thurs.

***UPDATE***
While many of the flights for Thursday (8/23) morning were cancelled, ours was not! Isaac turned to the south more than expected, so Puerto Rico (our transfer) was no longer in the track. SO we are out of the tropics now and back in New England. Hope none of the storms come up this way this year (like Irene last year). Stay safe all our island friends!

Well it's that time of year again. Today's (6/7) radar shows rain over the whole Caribbean and it is definitely accurate. It is pouring here and we even have some thunder (rare for the island). It reminds me of last fall during the hurricanes. So in honor of it officially being the 2011 Hurricane Season (June 1- November 30), I thought I'd add this tab to keep you up-to-date on the hurricanes affecting St Maarten. There are also some of our preferred links for storm tracking. As well as the outlook for the season and the storm names. Enjoy tracking with us! He has estimated that this hurricane season will have about nine hurricanes, 17 named storms, and five major hurricanes developing to at least Category 3 strength, or higher.

The first named storm was last week, Tropical Storm Arlene. She only lasted a day or two and was no threat to our island, hence forgetting to post about it here!


30 August Update
Again I've fallen behind on my hurricane updates. We've had Franklin, Gert, Harvey, Irene and Jose since I last posted. Most of these storms again either did not affect us much or we were in Africa during the early stages of Irene (changed to a Tropical Storm as it passed us). Though we've been lucky this season so far, the Northeast States have not been so lucky with Irene hitting this past weekend. It is strange to think that we haven't had any major storms yet, and our friends and families back home are without power, towns are totally flooded, this is usually our life this time of year. Thankfully everyone we know is okay, no damage at their homes, just no power for some.

Next on deck is Tropical Storm Katia, currently predicted to be a Cat 3 by Sunday, we're hoping she continues on the predicted track that takes her just north of us. We'll let you know what happens!


Thankfully Hurricane Katia, a strong Cat 3 stayed on it's predicted track and kept far enough north of us that we didn't get anything more than a sprinkle and some rough seas. Tropical Storm Lee dumped a lot of rain on the Gulf Coast. Now we're watching some development that is likely to become TS Maria in the next few days, we'll see! Though it's been a busy season so far, but we have been lucky so far and have avoided any real hits, let's hope the rest of the season follows suit.

**Quick update** TS Maria is heading straight for us! Luckily it should be a TS still, so lots of rain and probable power outages. TS Nate is in the Gulf so no threat to us. Busy busy season this year. This date last year we were only on F (Fiona) and we're already on N!

**Maria passed to our north about 40 miles. It was the slowest moving storm, expected to arrive Friday night/Saturday morning, we didn't even see rain until Sunday evening and finally thunderstorms on Monday! So it wasn't too bad, we didn't even lose power! (until the next day of course when the weather was perfect, go figure!). Another TS come and gone, now we wait for the next (though the track looks quiet right now).

Sorry for the terrible formatting on this page. It gets screwed up everytime I update it and it looks fine on the preview then turns out weird. Anyway we are currently a day out for TS Ophelia. She is expected to pass to our north and not be a threat to the island. We may get wind and rain as usual with her tailwinds, but nothing we aren't used to. TS Philippe has also been named, but he is expected to turn north and head into the open Atlantic well before he approaches the islands, so yet again no threat. It's been a very active season but so far our little island has escaped any major storms, which is fine by us! A good storm can be fun, but the several days of no power or water after are not so fun.

So it's been pretty quite here lately. Ophelia dissipated before reaching us, only to later strengthen to a Cat 4 hurricane briefly while over the open Atlantic (after passing us). TS Philippe came closer to the islands than forecasted but did not actually affect the islands. It's past the peak of the season now and there are about 6 weeks left to the end of season. Hopefully it remains quite. Although there haven't been many storms, our power outages are more frequent than usual, but thankfully the winter winds have come back a bit and it's not too bad. That's all for now. This may be one of the last posts before the end of season.

Pretty quite here in the islands now. Hurricane season is almost over and the weather has definitely improved! The tradewinds are back and the rains are calming down. TS Rina and Sean were both named, but didn't amount to much and stayed away from our area. So this is probably the last post for the season (and maybe our time down here!) Thanks for following and we'll update this come next summer.

Email ThisBlogThis!Share to TwitterShare to FacebookShare to Pinterest
Home
Subscribe to: Posts (Atom)
We are currently located in Bogalusa, Louisiana!